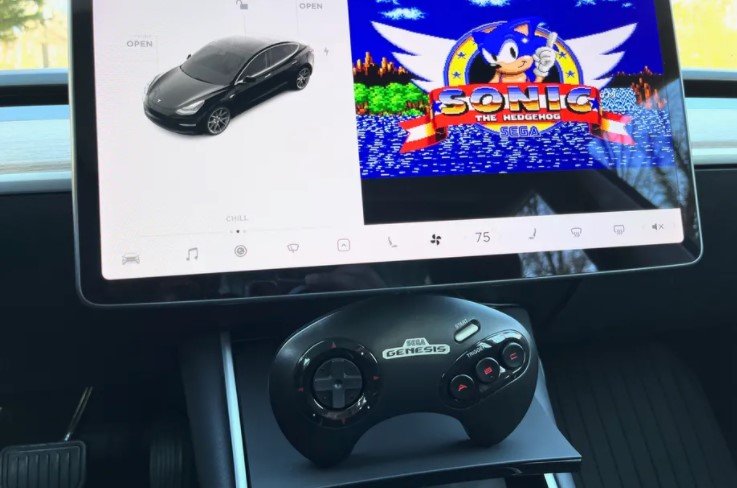 The original Sonic games have stood the test of time with all kinds of different re-releases across the generations of gaming consoles. They’ve now come to Tesla’s cars.

Elon Musk, Tesla CEO, confirmed Sonic 1, released in June of 1991 for the Sega Genesis console, is coming to its fleet of cars. However, Musk hasn’t given a date as to when you’ll be able to play through Green Hill Zone in your car.

With the huge screens that every Tesla has, it’s no surprise that games alongside Netflix would make their appearance, especially as entertainment for kids sitting in the back.

There are already some games that you can currently play before Sonic arrives which are advertised as ‘helping the long drive’.

The USB port near the screen can also accept a controller with a USB port, so an 8BitDo Pro 2 or DualSense controller can be plugged in to play games such as Cuphead, Stardew Valley, Fallout Shelter, Cat Quest, Sky Force Reloaded.

The classic original Sonic game was released 30 years ago and while there have been some faults in the series over the years, running through Spring Yard Zone is always a pleasure for any gamer.

The blind shot camera feature automatically shows a live camera view of the car’s blind spot whenever a driver activates a turn signal. Elon Musk suggested the feature was in development in July 2020, but now it’s arrived to make maneuvers like changing highway lanes a little bit safer.

The update also provides improvements such as an easier way to add multiple waypoints to a journey, and simplified controls for accessing a car’s primary controls. It’s also become possible to drag and drop your most frequently used apps to customize the car’s menu bar, and the heaters in the front seats can now regulate temperature based on how hot it is in the car generally.

There are also a bunch of less essential and ‘more fun’ inclusions in the update. TikTok videos can now be watched directly from the car’s touch screen via Tesla Theater, and Tesla Arcade has not only been updated with Sonic the Hedgehog, but Sudoku has also been added.

Finally there’s “Light Show”, a feature that appears to be coming to all Tesla’s after being shown off on the Model X in 2015.

Are more games and entertainment a good thing to have in cars or are they dangerous distractions? Have your say in the comment section.